The Awakening Of A Conservative

This is a story about Larry and Zelda.   Larry's post-doctoral work had taken him to Thailand,  to study tropical rain forest ecology.  He knew that when global warming destroyed all the ice in the Arctic, understanding tropical rain forests would be the key to the survival of polar bears.  His whole life had been spent agonizing over the unfairness of America, and the hardships people endured at the hands of conservative haters whose only goal in life was to obstruct people's happiness by the invention of cruel and arbitrary devices such as their definition of marriage.

It was there, in the ancient Mekong river valley, that he met Zelda.  At first he had no idea what to make of her.  Romance was the furthest thing from his mind, he was driven only by the need to save the planet.  But she was beautiful, and she moved so gracefully.  In Larry's free time, they would spend hours together on the banks of the vast Mekong River, talking quietly about how conservatives had brought the world to the very brink of destruction, and what the future held.  They both understood the harm caused by the evil boundaries placed on marriage by conservatives.  They both knew that one cannot place limits on true love.  The bond between them grew, and they knew  that, in spite of the haters, they would spend the rest of their lives together.


When the Supreme Court declared that there can be no boundaries of any kind in marriage, they were overjoyed, because that decision removed the only obstacle to their plans.  Their right to be together had been declared a constitutional right.  Larry made arrangements to bring Zelda back to Berkeley with him.  It wasn't an easy proposition.  There were obstacles, but true love will always find a way.  Zelda was a 390 lb Mekong River catfish.  But this had no significance to either of them, all they knew was that they were meant to be together.

At first Zelda was happy cavorting in Larry's swimming pool.  Larry kept it stocked with crawdads and small dead things, and would occasionally bring her favorite treat, chicken gizzards.  They were together, and life was good.  But Zelda had a secret.  Surely Larry would understand, and finally, one afternoon, she overcame her anxiety and told him.  Zelda was a lesbian catfish, who identified as a snapping turtle.  But there was more.  As far back as she could remember, she had always identified most strongly as a coffee table.  Larry was stunned by this news, but, being a good liberal, accepted her right to be whoever or whatever she truly was.  He only wanted her to be happy.

He made her a little wooden base, with a little shelf where they could put magazines and the TV remote, and she moved into the living room on a Saturday afternoon.  She was ecstatic.  Now they were truly together under the same roof, and that evening, his neighbors came to the house to celebrate.  Almost all of them were conservatives, and while they felt a little uneasy, they kept their true thoughts to themselves. 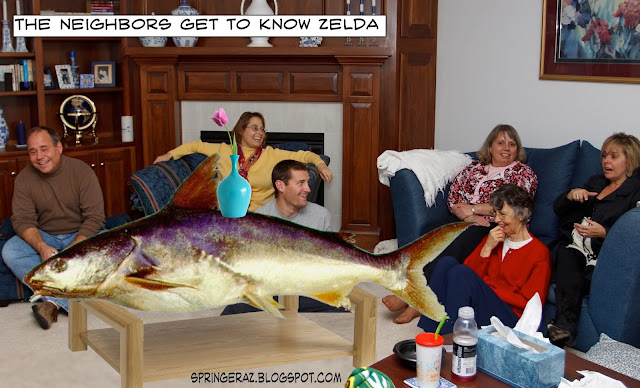 They were both exhausted from the days efforts, and Zelda fell fast asleep as soon as the guests left.  Not wanting to wake her, Larry tiptoed upstairs to bed.  It had been a long day, and he too needed some sleep.  He tossed and turned, but sleep wouldn't come. He was deeply disturbed by Zelda's revelation.  All his life, he had been a liberal, and there in the dark, he did something he had never done before.  He began to think:

What if…what if there was a natural order to things that stood beyond political ideology?  What if the concept of marriage between a man and a woman had a basis in actual reality that transcended political fashion?  What if there was a legitimate basis for the conservative assertion that the idea of men marrying men, or anybody marrying a catfish, was an aberration that went against a higher law?   He was suddenly overwhelmed at the hubris of the Supreme Court's notion that they had the authority to supersede that law.

Who established that higher law?  Did God exist, after all?  Larry's mind raced through the night.  When Larry had gone to bed, he had been a life long liberal, living in fantasy.   As the dawn broke, he understood that he had been wrong.  He knew that there existed an objective reality which he could no longer ignore.  A liberal had gone upstairs to bed, but a conservative came downstairs in that early Sunday morning light, and he knew what he had to do.  Zelda was just a catfish, and he could no longer ignore that.

Zelda, of course, had died in the night, there on her coffee table base.  (To suggest that she might have somehow survived the entire night out of water would just be silly). 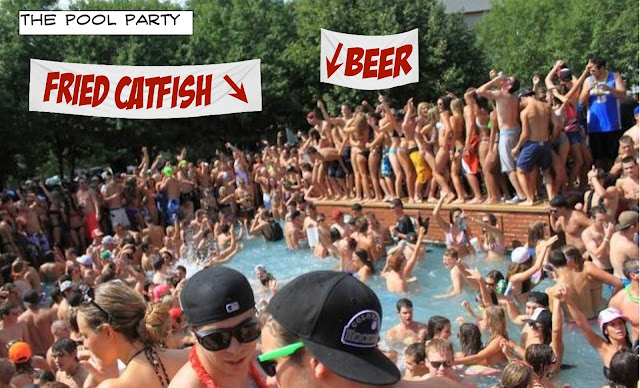 Larry invited the entire neighborhood to a pool party that Sunday afternoon, and the place was crowded with happy people enjoying the event.  No one spoke of Zelda.  They could sense the change in Larry, and It was a happy day.  The pool was perfect, people brought side dishes, and there was lots of beer, of course.  And all the fried catfish they could eat…
Posted by springeraz at 11:13 AM