At the Aspen Institute's "Washington Ideas Forum", John Kerry said:  "…The cold war was easy compared to where we are today".  He says the "complexity of the world today" (read: "chaos") makes things much harder.   He made no mention of this administration's role in creating that chaos.

If it's fair to say that the Cold War was "easier" than the situation we find ourselves in now, it might also be fair to ask: "why?".  Here are three main reasons why, Mr. Kerry:

1.  We had actual leaders in charge who never heard of "leading from behind".  They took the Constitution and their oath of office seriously, and they made decisions based on what served American interests best.  They understood that they worked for the People.  They had backbone.  (Okay, there was Jimmy Carter, but hey…)  They projected competence, and when they drew a "red line", everybody knew they meant it.  They knew who our friends were, and they knew who our enemies were, and they acted accordingly.
.
2.  They weren't afraid to let the military do their job.  They understood the need for a strong military, and they made sure ours was well funded, well trained and well equipped, and when the time came for the military to act, they listened to the Generals.  There is a reason we have a civilian Commander In Chief, but anyone who is worthy of the title knows when to get out of the way and let the military do what it does.  (LBJ's handling of Viet Nam proves my point).  And they never would have dreamed of treating the military as some sort of social experiment.

3.  They didn't walk around with a long face.

They took care of real problems instead of trying to distract everyone with a lot of crap about how global warming is the biggest threat facing mankind.

Any Question Who'll Be Driving?

Gotta watch this one all the way through...(1 minute) to see how things work at this guy's house....mild NSFW at the end...

Posted by springeraz at 4:17 PM No comments:

When The Mojo Stops Working

Mr. Obama has not been getting much attention from audiences lately.  Contrast the rapture on the faces of his fans when he first came to national attention with the tone at events today.  Once again, at a rally in Virginia, and earlier in Massachusetts at a rally for the Dem gubernatorial race, the audience showed Mr. Obama their displeasure by walking out.  The whole mystical mojo thing seems to be wearing thin with his "base".  Most of us were on to him in 2008, and it looks like his base may be catching on.  The only one who'll never get it is him.

The faithful from every corner of his empire show signs of coming to terms with the reality behind the man they elected twice.

At every midterm election that's too close to call, Mr. Obama has been politely disinvited.  He only attends campaign events that look safe for Dem candidates, and when he does show up audiences have begun showing their displeasure by walking out. (Here and here)  More and more, they're onto you, Mr. Obama.  It's true that there will always be progressives who share his fantasy agenda, but  some may have tired of the lies and the spineless neglect.  Maybe the resulting dissonance will lead them to actually think about the agenda part.

It's encouraging to think that maybe even progressives have limits on their ability to deny reality.   Maybe there's hope.  Actual hope, not styrofoam column hope. To make his agenda work, he needs the wide eyed acceptance of millions of fatuous believers.  They appear to be waking up, and if it continues, things could change, hopefully soon. 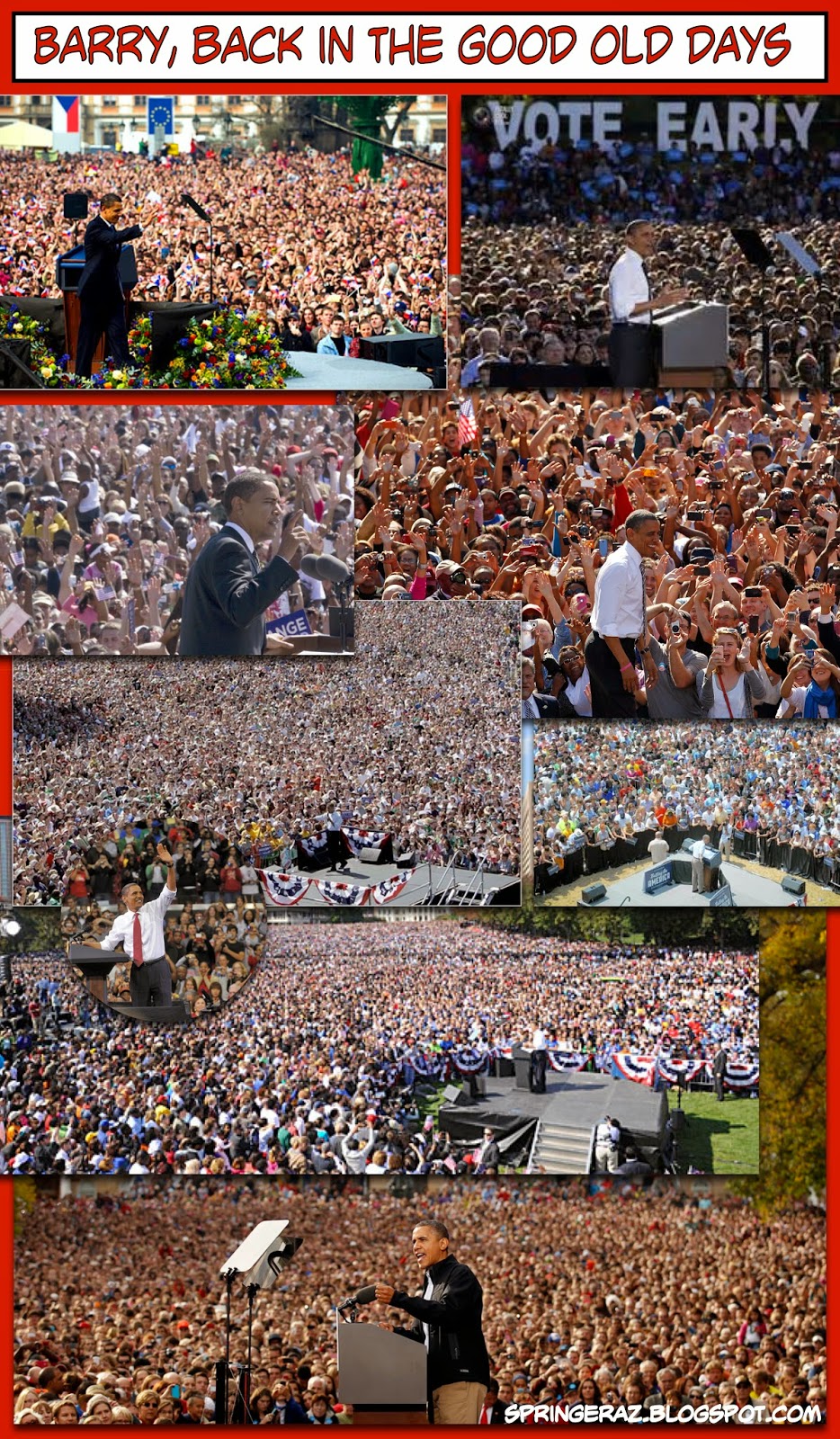 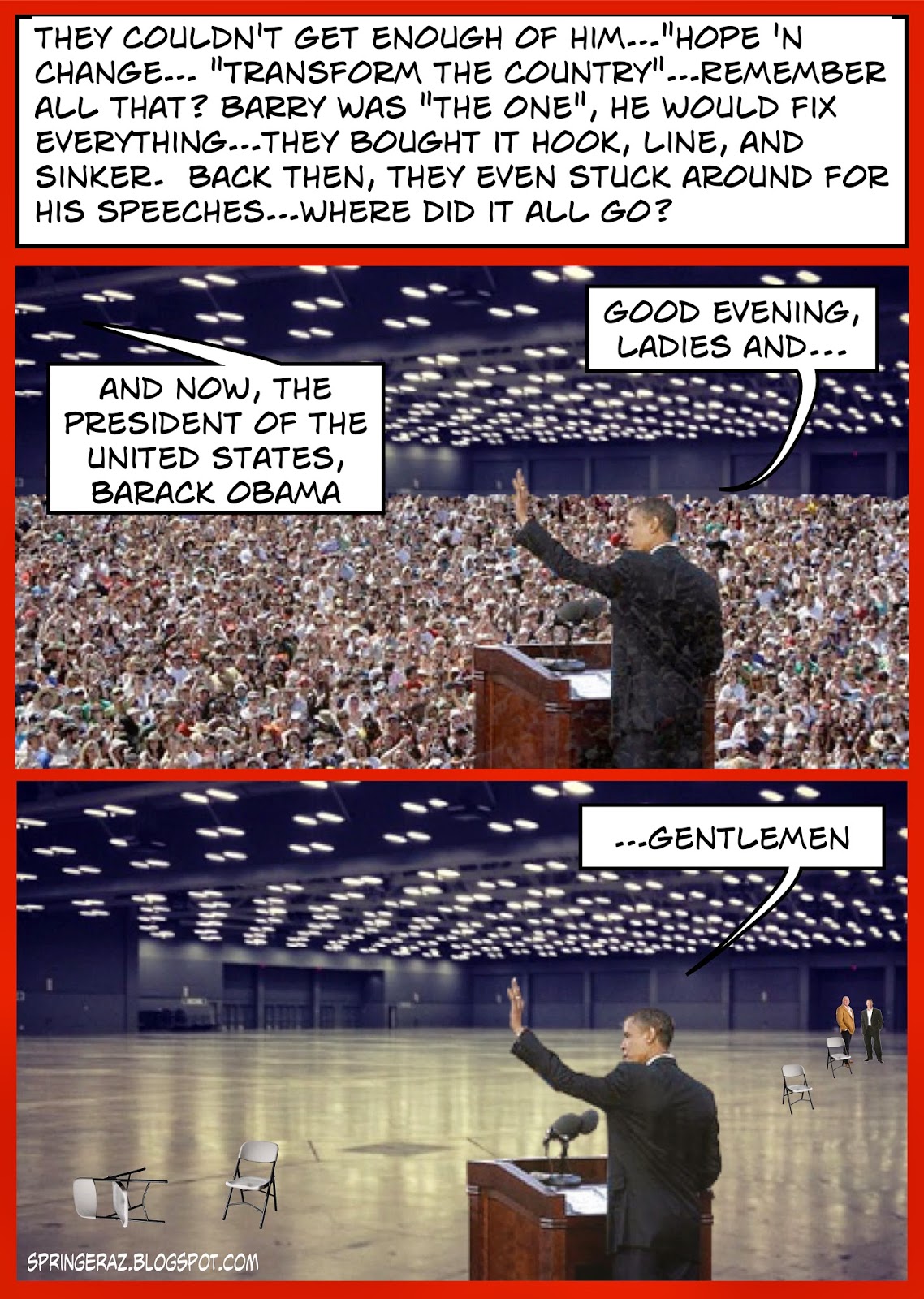 Something Scary For Halloween

It's that time of year again...ghosts, goblins, zombie hordes, the boogeyman, shadows that move across the room at night when you're home alone, all pretty scary.  But when it comes to weird and creepy, none of them can hold a candle to the people shown below.

Unlike ghosts, these people actually exist, but paradoxically, their stated beliefs are based totally on fiction.  No amount of reasoning can penetrate their fantasies, because, you see, they know what is best for the rest of us.  They also know, in the dark corners of their minds, that the causes they espouse are fictions.

Global warming, political correctness, evil corporations, evil fossil fuels, attacks on the 2nd Amendment and Liberty in general, charges of racism, sexism, classism, and xenophobia are not causes they actually believe in.  These are weapons of war.

Their goal is not a just, fair society.  Their goal is simply this:  raw, naked, authoritarian control.  Their scope of ambition is global, and America and everything it represents is standing in their way.

Halloween night will come and go, but until we do something to stop liberals, they will continue to walk among us.   Ghosts are pretty scary, but they're no match for the people who have seized control of our nation. 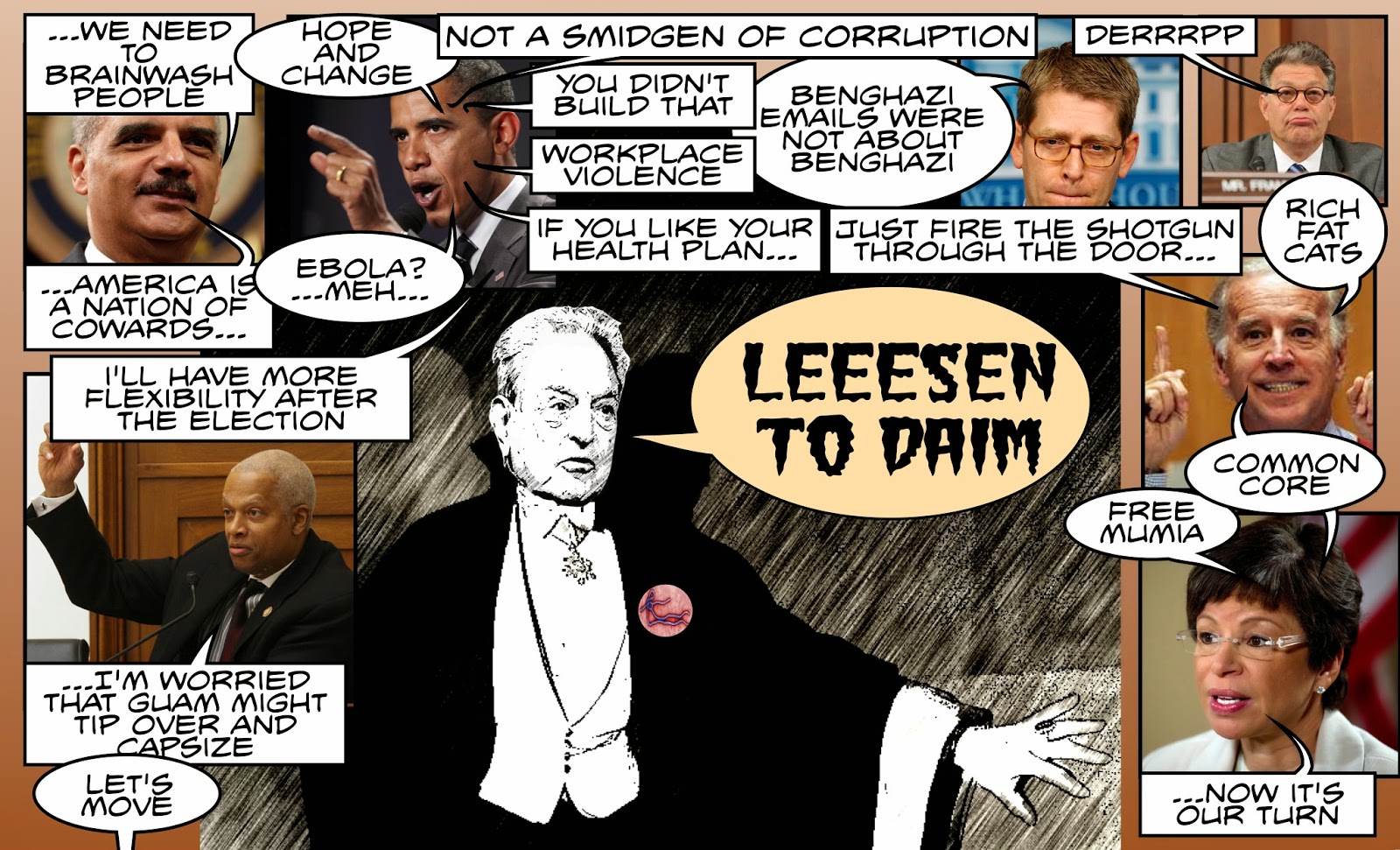 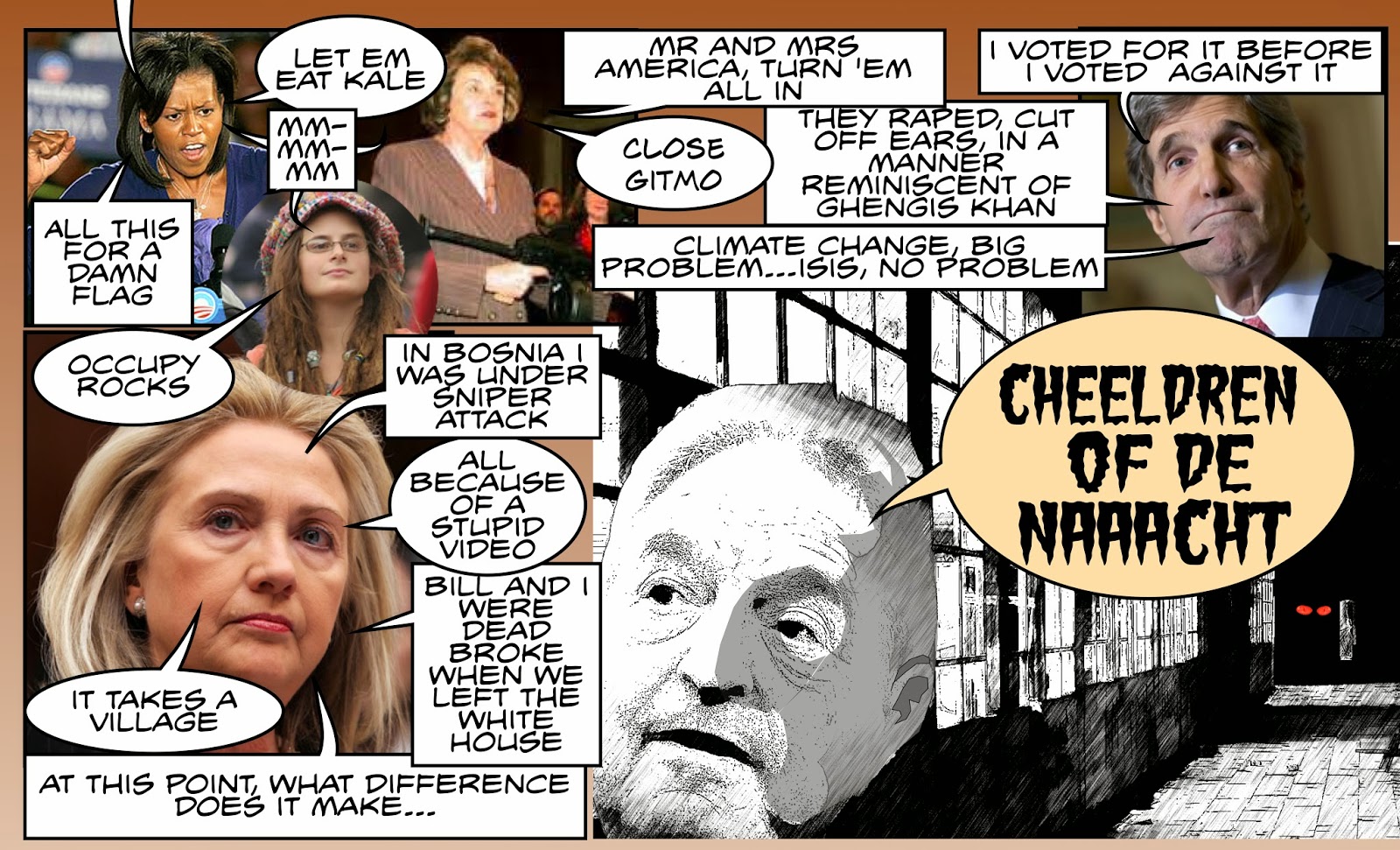 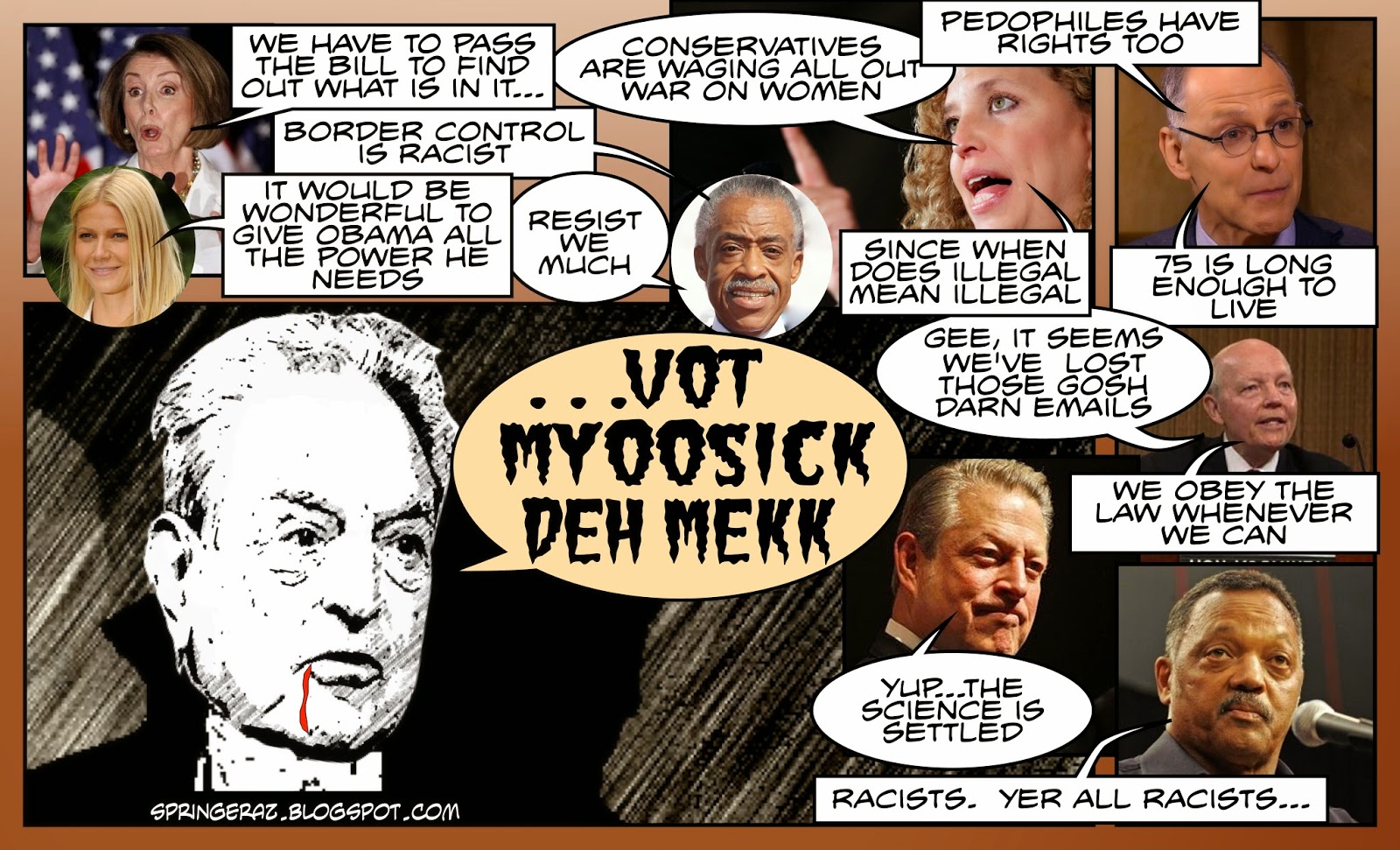 Cross posted @ Nuking Politics.com
Posted by springeraz at 5:30 AM 2 comments:

Al Sharpton teams up with Obama to select a new Attorney General.  It's a match made in Heaven.  (A followup to an earlier post at Nuking Politics.com) 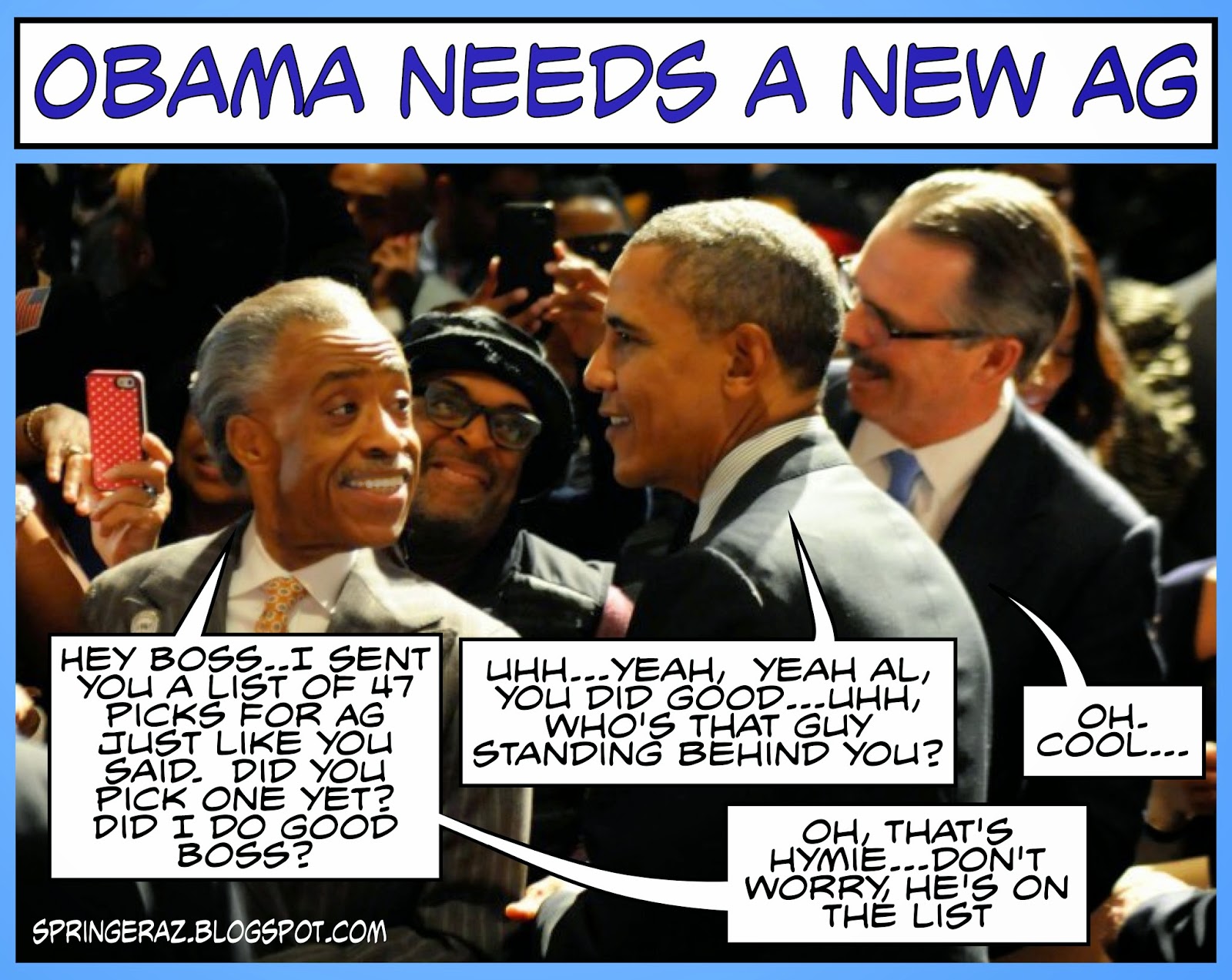 This Week In History 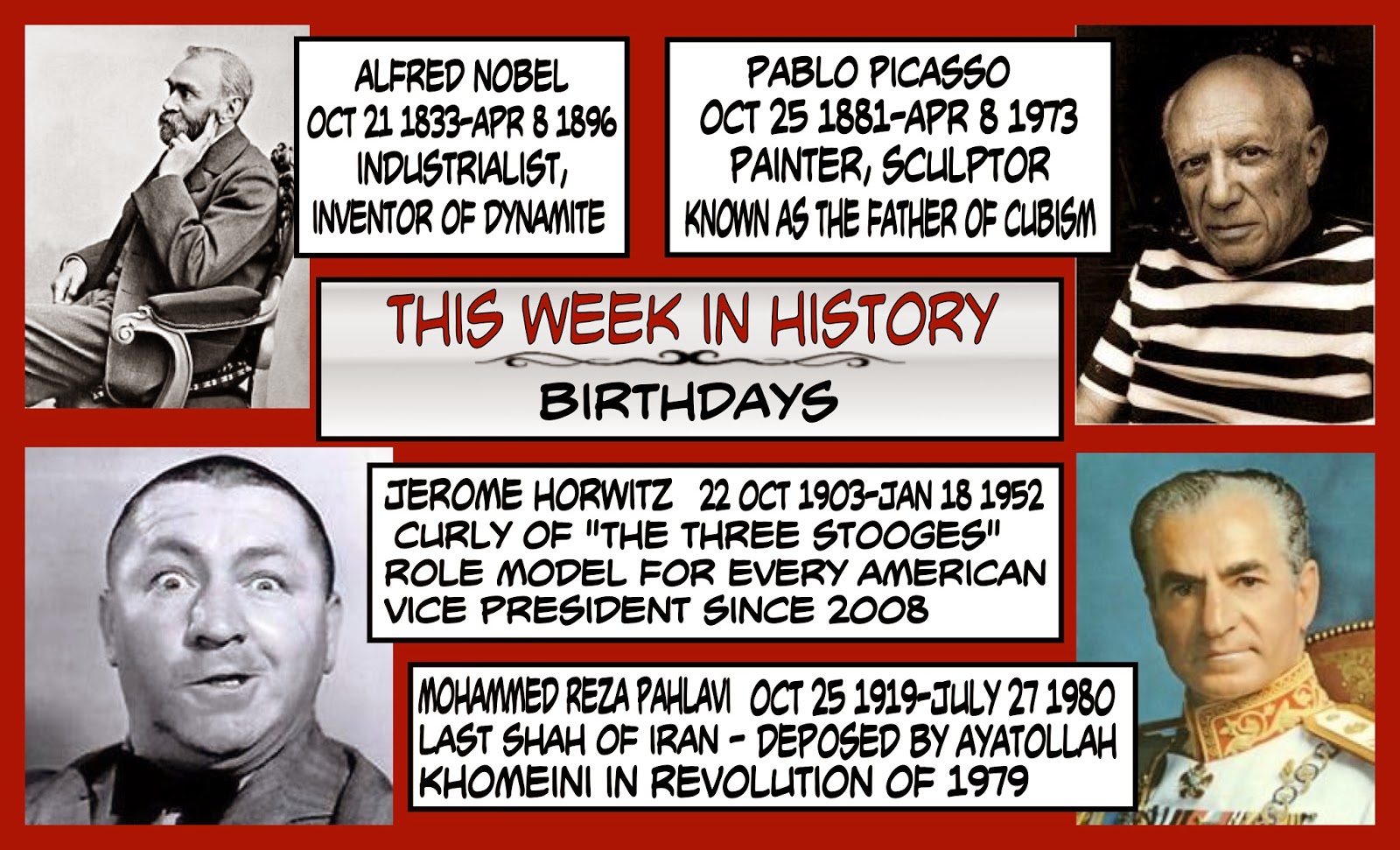 In Louisiana Elbert Guillory is a Republican running for the US Senate seat currently held by Democrat Mary Landrieu.  She has recently been accused of bilking Louisiana taxpayers for the expense of her air travel to and from her home in Washington DC, and it has been disclosed that she does not have a residence in Louisiana that meets Senate guidelines for eligibility.  When she is in Louisiana, she stays at her mother's house, by her own admission.

With these kinds of things going on, she doesn't need the kind of campaign ad produced by her opponent, Mr. Guillory.  When it comes to political ads, it is one of the most effective smackdowns  I've seen in a long time.

Ebola...A "War Without A General"


During a recent Congressional hearing on the ongoing ebola outbreak, Congressman Michael Burgess (R-TX) said  "We are in a war without a general".  This can be said of Mr. Obama's implausible treatment of just about everything, but it's reasonable to consider whether the confusion and neglect about ebola suggest something beyond mere incompetence.

Lately Mr. Obama reminds us frequently of the need to remain calm and not panic.  Nothing contributes to the tendency to panic more than being lied to and kept in the dark.  Some straight answers about Mr. Obama's intentions would help this greatly.  Here are some unanswered questions:
Given that there are no answers forthcoming about any of this, It is reasonable to expect that, far from panicking, rational people would find cause to be concerned about Mr. Obama's motives.  Eric Holder's comments notwithstanding, we are not a "nation of cowards".  We can handle the truth.  The problem is Mr. Obama seems to have some reason for avoiding it.

If Mr. Obama is attempting to increase public anxiety as a pretext for operating one of his Executive Orders, he's going about things the way you might expect.  If instead he wants to deal effectively with the threat, he should provide us with some answers.

A Pointed Message From Texas

When I saw this picture, for some reason it made me think of Mr. Obama.  It's just  a picture of a fence, but I have to wonder if Mr. Obama has any idea what fences are for.

People use fences for lots of things, Mr. Obama, like keeping their cows from wandering off.  If people don't have any cows, they can still use a fence to protect their home, say, or a ranch, or maybe even a nation.  Fences keep the bad guys out.  If you're not sure who the bad guys are, feel free to ask most any of us.  We'll be happy to explain it.  That's how we learn stuff.  When someone cares about something, especially if they promised to take care of it, fences are a good way to protect it.

The picture was sent to me by Ralph, good man, Marine, grew up in Waco.  You can bet that when he saw it, he was thinking the same thing. 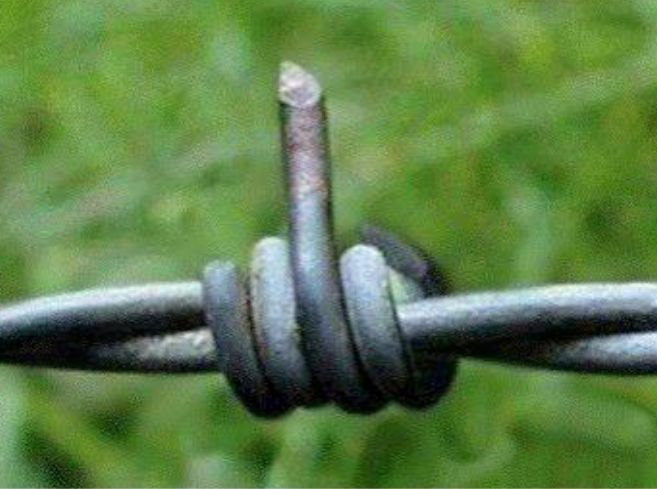 Confronted now with the undeniable fact that his response to ISIS actions is doomed, Mr. Obama chooses, once again, to blame others.  This time it's the intelligence community, whose daily briefings haven't explained the problem adequately, you see.  The problem with this is that over the last 6 years, Mr. Obama has declined to attend nearly 60% of these briefings, being engaged in more pressing matters such as partisan politics and golf.

These briefings have provided a consistently accurate assessment of the situation in the Middle East, and of terrorist activity throughout the world.  This information would have been used by a Commander In Chief worthy of the title to guide his decision process.  Mr. Obama displays an unsettling lack of concern for the threat posed by Islamic extremists to this country.  Instead, what passes for planning is guided by political expedience.  "Al Qaeda is on the run"…"ISIS is a JV team"..These are not indicators that inform policy making, these are slogans intended to prevent his "base" from waking up.

In Mr. Obama's mind, reality is a cruel beast that he can safely ignore as long as liberals are willing to blindly go along with it.  If he spent half as much time trying to do the right thing as he spends making excuses and blaming others…but, no.  He's gotten past liberals for six years doing it this way, so why change now?

His negligence would not be tolerated were it not for the leftist sheep who care more for political correctness than for reality. 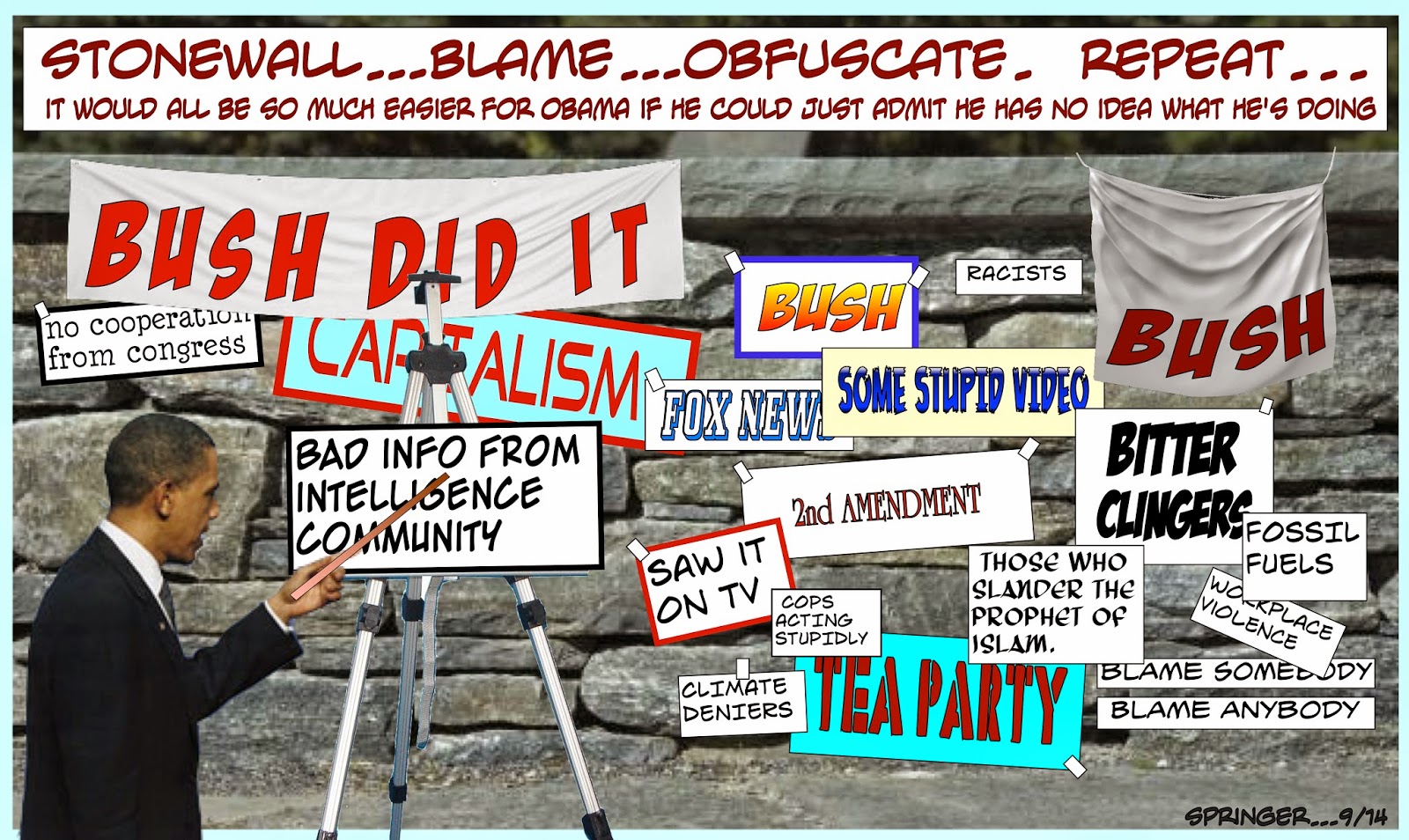 NOTE:  For liberals who may have trouble comprehending the above graphic, here is a simplified diagram that will help you understand it. 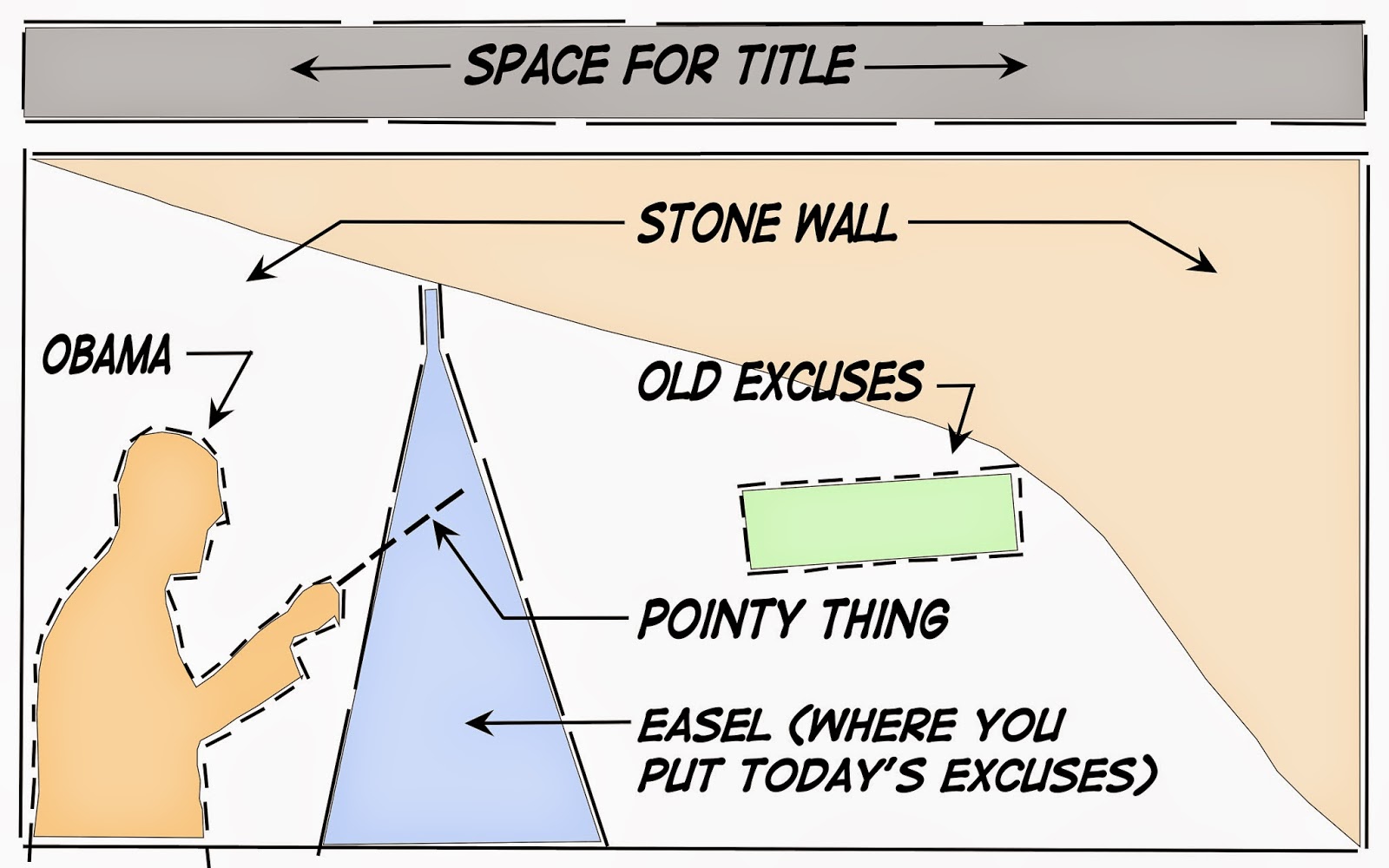 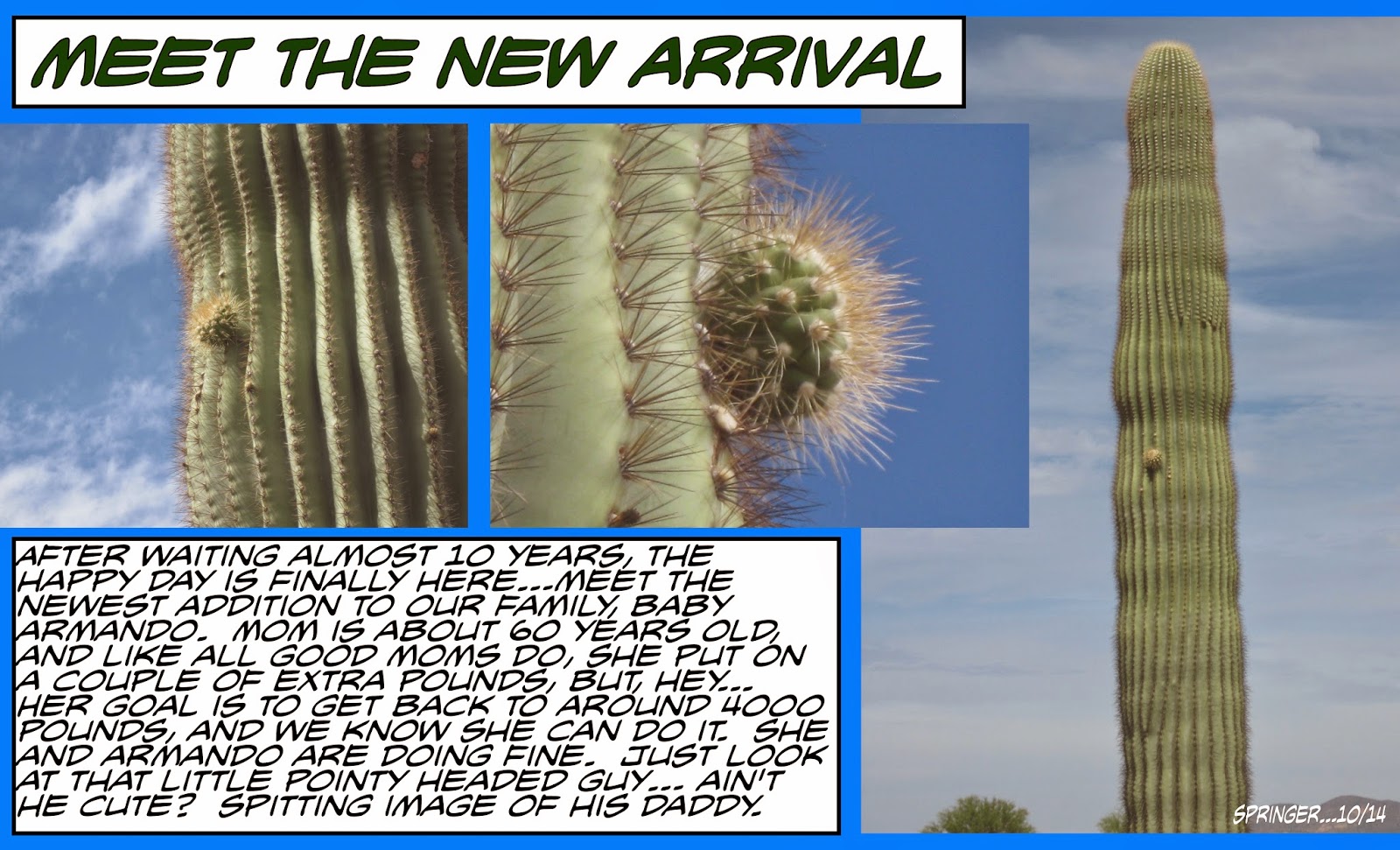 Alton Nolen, a Muslim convert whose association with jihadi terrorists was openly displayed on his FB page and other social media, beheaded a woman in Oklahoma recently, after being fired for disruption involving badgering other employees about converting to Islam.  "Shouting Islamic phrases", he was attacking a second victim when shot by security.   MSNBC's Melissa Harris-Perry assures us that the attack was "workplace violence", and that Islamic terrorism had nothing to do with it.  On an MSNBC roundtable discussion she insisted that "Islam was not relevant" to the attack.

Liberals can't help themselves.  Their view of just about anything seems to be tailored to one thing:  Regardless of the issue at hand, Mr Obama's narrative must be protected.


" ...Look at their heads buried deep in the sand
hiding from evil made by their own hand..."

In all cases, the obvious cause of the problem is considered "not relevant" if discussing it causes Mr. Obama any difficulties.  Instead, the problem is those gosh darn racist, homophobic, Islamophobic, xenophobic, Bible thumping, gun clinging, climate denying conservatives. 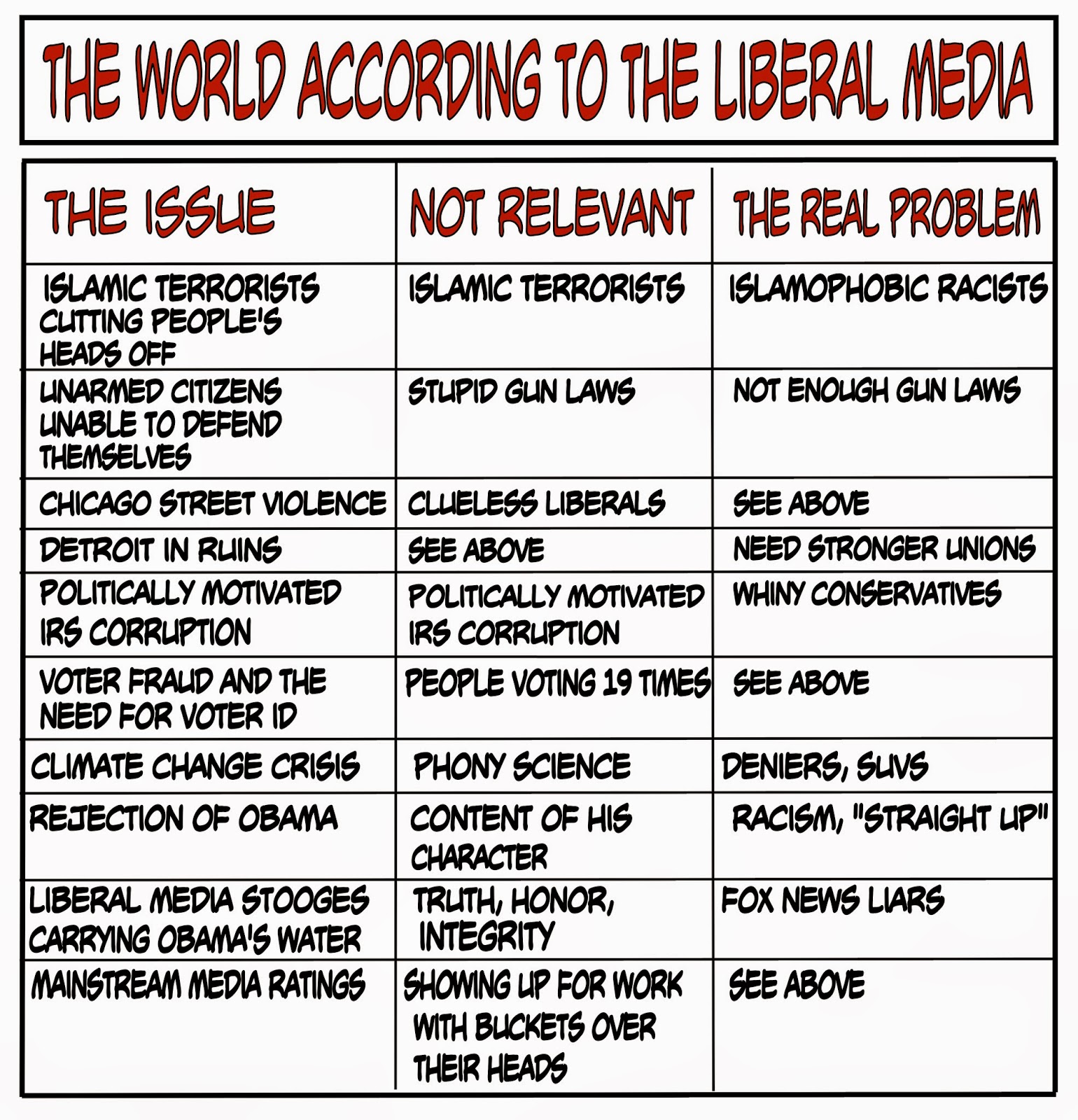 Carrying Mr. Obama's water may make you a proud member of his bucket brigade, Ms. Harris-Perry, but it doesn't mean you actually have to wear a bucket over your head. 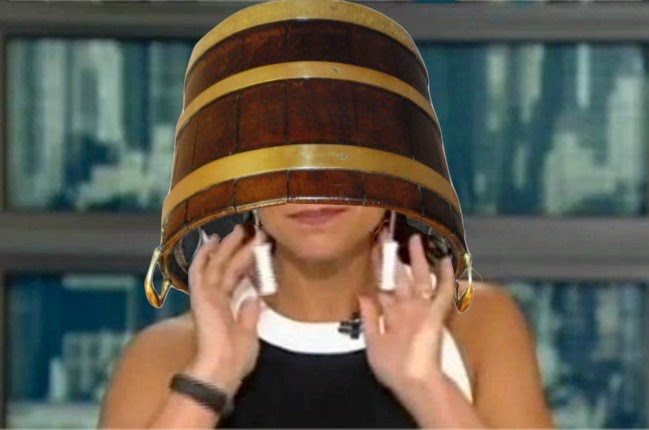