Onlookers were dumbfounded last week, confronted with a strange, unsettling sight.  Somebody managed to pull himself together, and took a picture of the Reverend Al that will go down in history as one of the rarest, most unbelievable sights ever photographed.

It is a picture of Al Sharpton with his mouth shut.

The crowd of admirers was stunned as the Rev Al stood there, not talking, with a strange, dazed look on his face.  He wasn't even stabbing the air with his finger.  Panic swept the room, several people in the audience collapsed, and one person, obviously in a state of shock, said "we didn't know what to do.  We were waiting for him to tell us when to start the riot, but he didn't say anything.  He hadn't even told us what we were supposed to be mad about yet.  It was scary."  Someone pulled himself together long enough to call paramedics.  They were on scene in less than two minutes, and as they were preparing to stabilize him, he was heard to say…

"I'm fine, I was just in between sentences"

Here is a picture of that moment, frozen in time, along with a small sample of others showing the Al we all recognize. 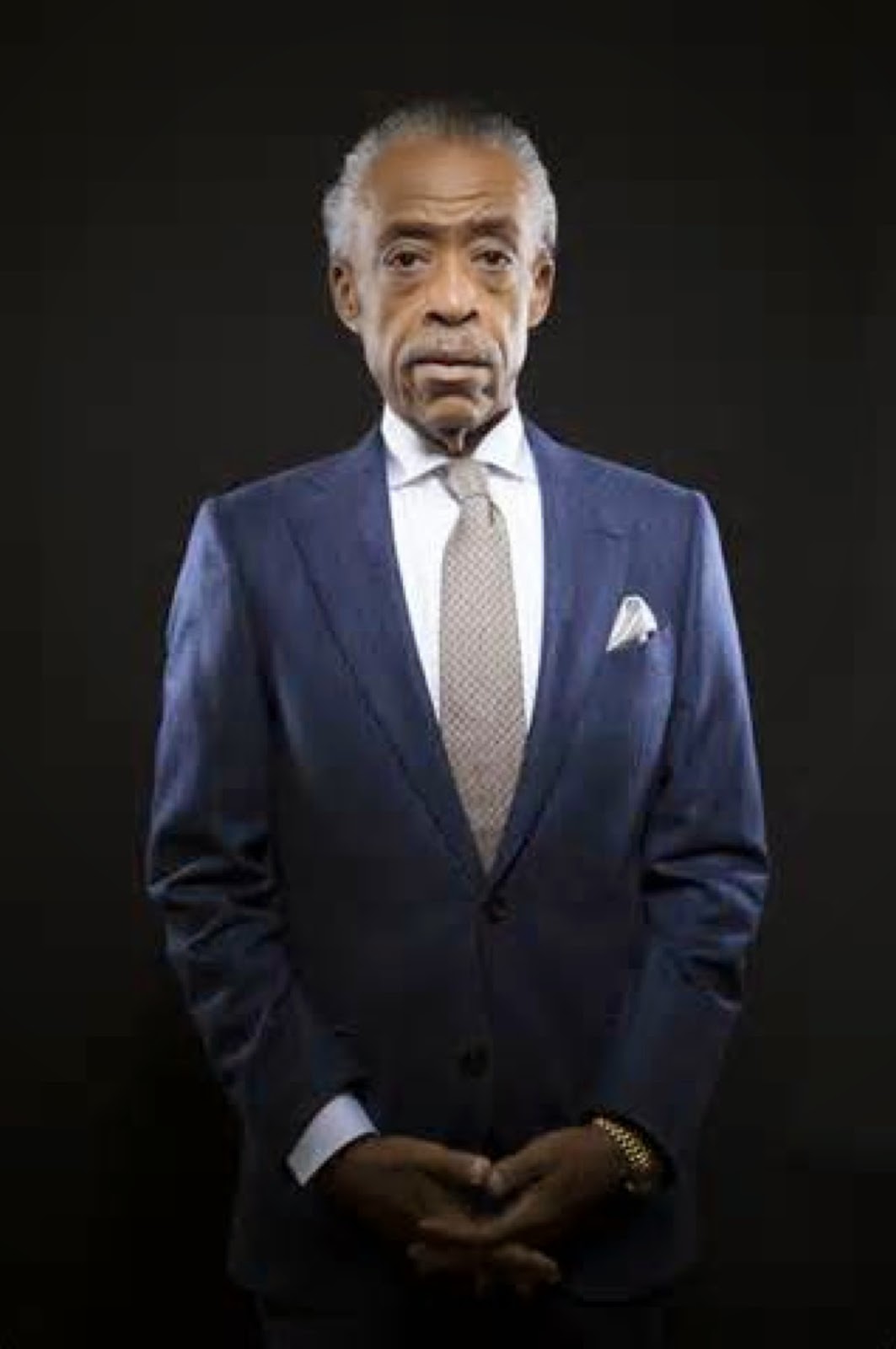 Our experts, using the latest face recognition software,
have assured us that this is indeed Al Sharpton. 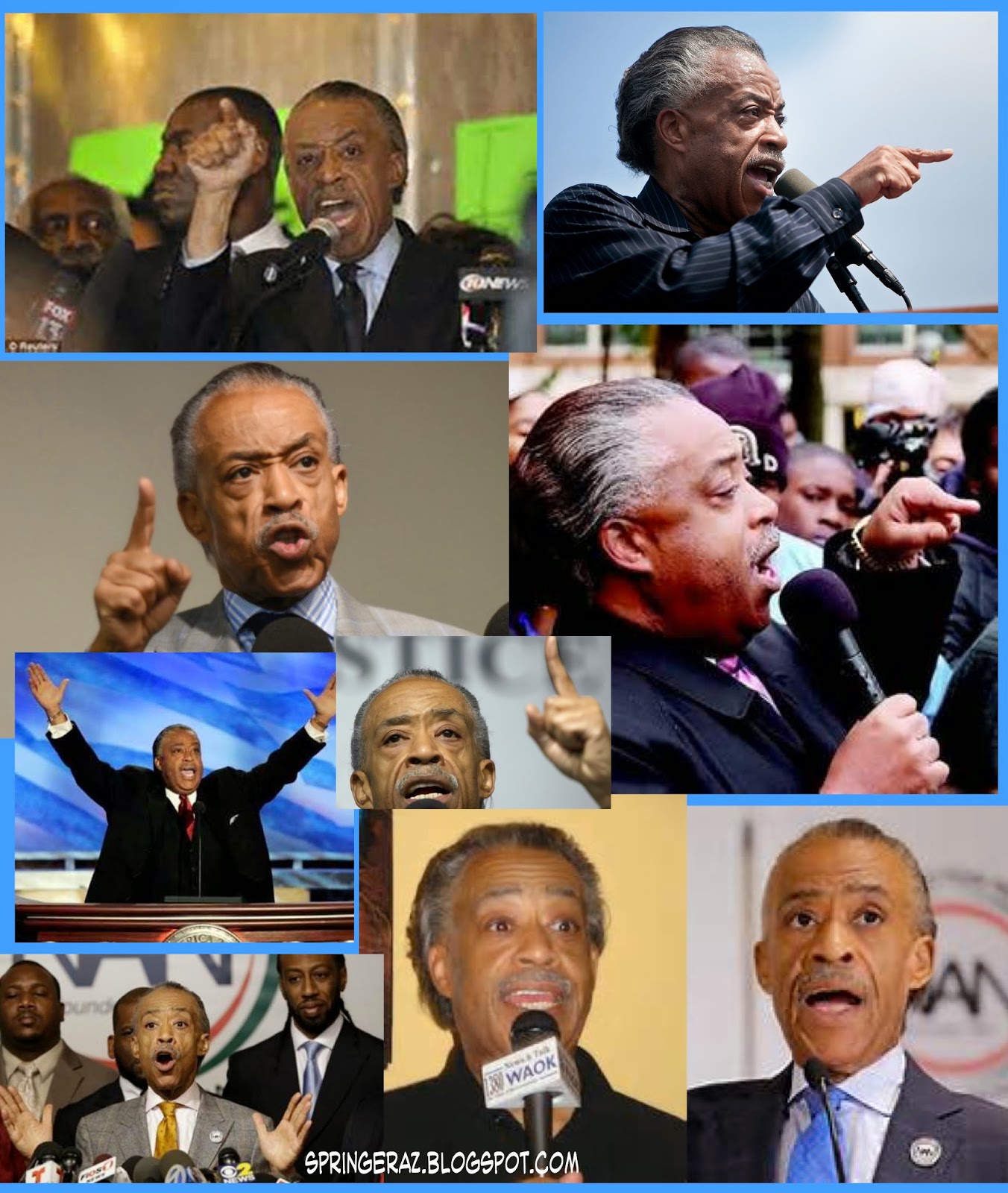 Posted by springeraz at 3:00 AM No comments:

The Voice Of Sanity

Here is the voice of sanity from a Harvard professor.  This Christmas we will again celebrate the birth of Christ, who came here to teach us this same message.


That light still shines in the world.  Truth, clarity, and respect for others is only possible if we have respect for ourselves, and if we listen to the things He taught us.  There are people now in this country who sow hatred and division, who want to replace His message with a very different one.  They've always been among us, and they know that to succeed in their plans, they have to turn us against each other by creating anger and confusion, and by turning us away from our religious principles, however they might be expressed. But they will only succeed if we let them.
Read more »
Posted by springeraz at 10:57 AM 2 comments:

Obama Ponders His Next Move

Obama spins the foreign policy wheel, hands the Castros a huge victory, America gets nothing in return, Obama stands at 0 for 10 in his foreign policy efforts, and ends up with a Texas chili bowl for his trouble.  Socialism wins, and the Cuban people lose, not to mention the damage to what's left of our national image.  But Obama doesn't see any of that as bad.  So should he spin the wheel again or not?

Obama ponders his next move:  "After all, America does need to be brought down a peg, and besides, thanks to the RINOs, amnesty is in the bag, right there next to Obamacare.  And they actually passed the CRomnibus.  So since the midterms, it's been a pretty good run from my point of view.  So what the hell, spin it again.  It's not my money after all, and whatever happens, if America ends up looking bad, hey…. Anyway, I like a good Texas chili bowl now and then, so even if I lose, I win" 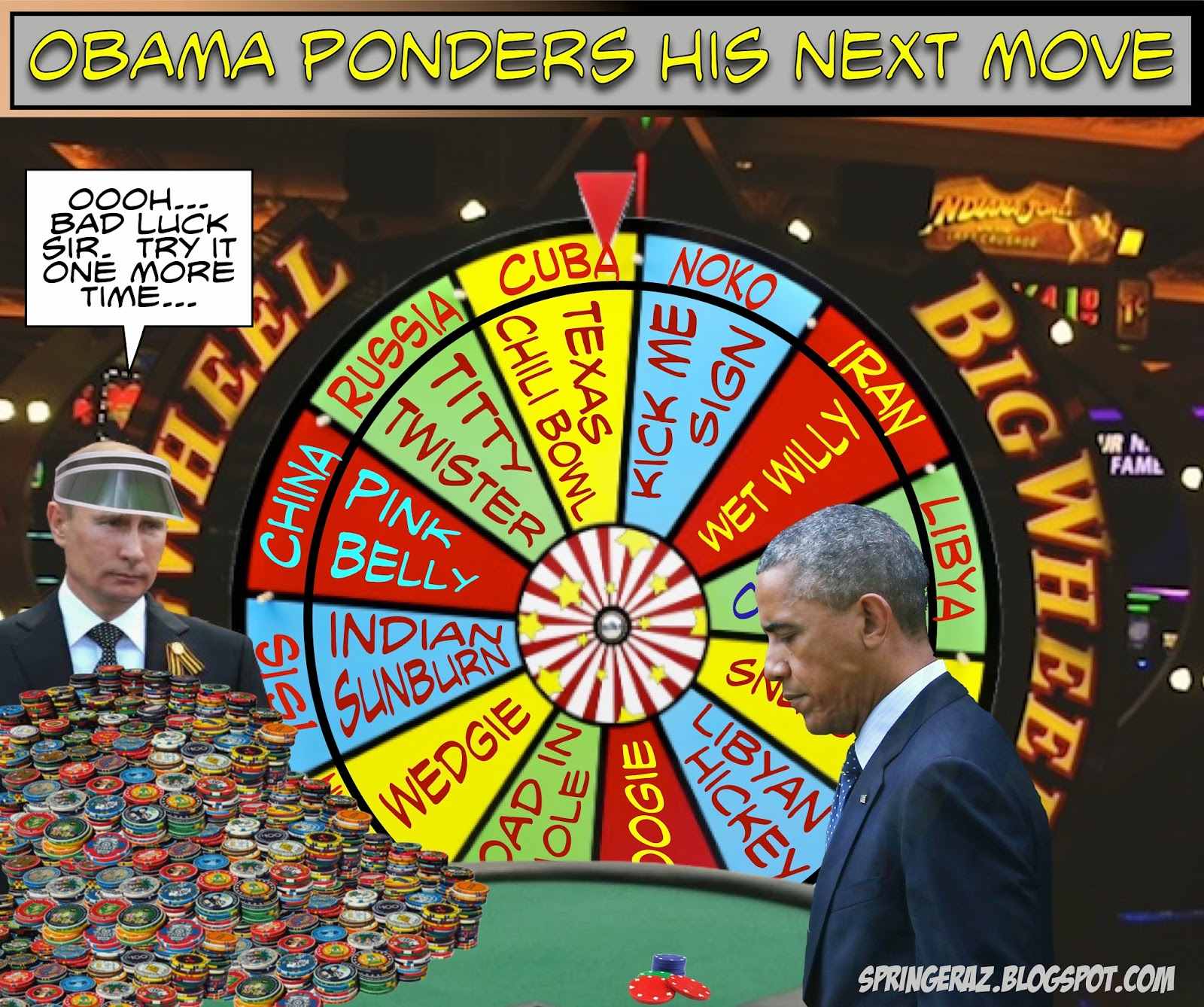 So Much To Transform, So Little Time

Today President Obama announced he would begin the process of normalizing relations with Cuba, including establishing a US Embassy in Havana.  Exactly how he will go about this is unknown (yet another Exec Order?), as Congress is the only entity that can end an embargo.  But then, when has he ever let that sort of thing stand in his way? 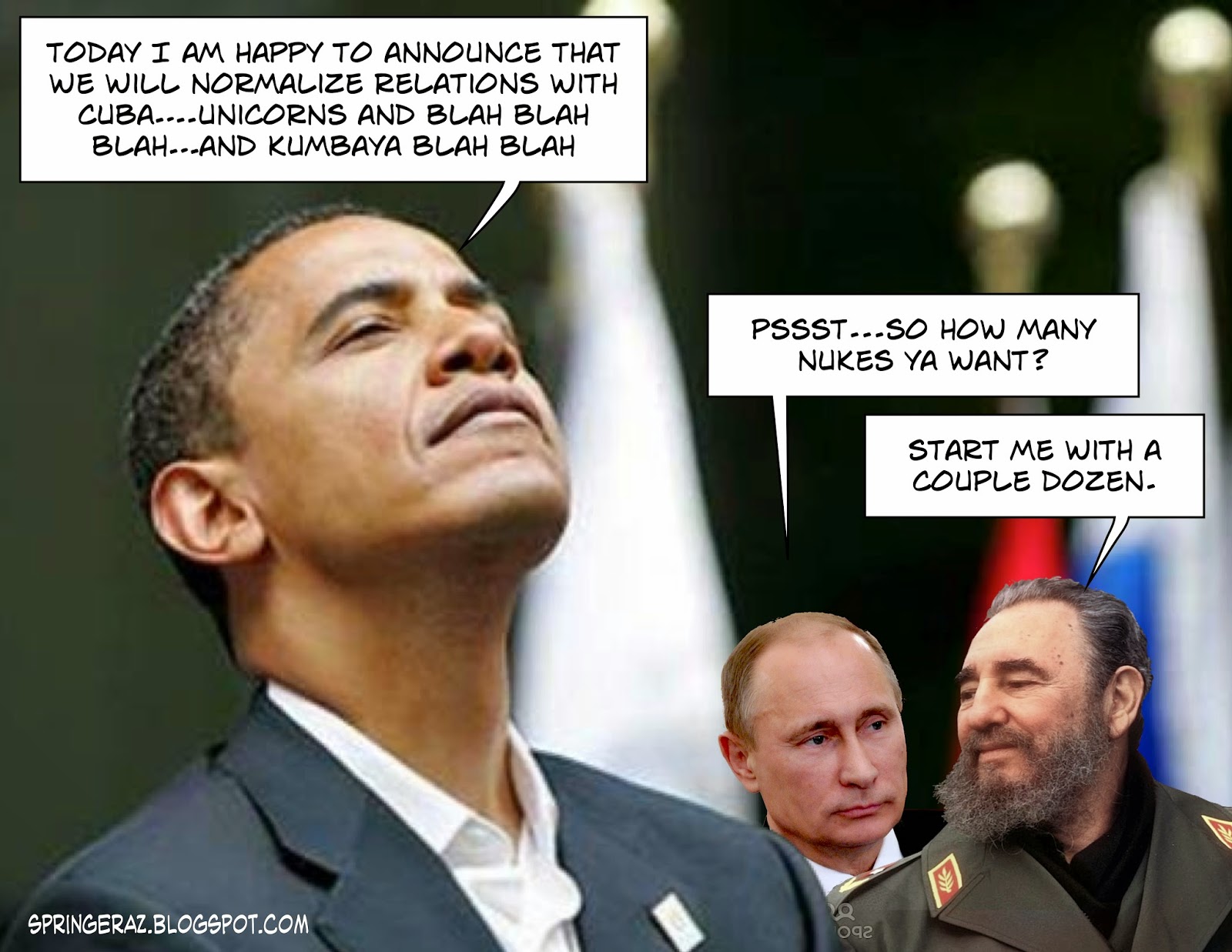 One Final Thought About Dr. Gruber

Over the last two weeks, Dr. Gruber has received his share of attention for his statements disclosing the deception used to craft Obamacare, and his repeated statements to the effect that Americans were too stupid to catch on.  With the exception of the MSM, just about everybody has had something to say about the cynicism exposed by his statements. The humiliating takedown by Darrell Issa's committee yesterday, (12/10) was well deserved, and If there's more to follow, he deserves that too.  (He wasn't allowed to plead the 5th Amendment, that phrase has been copyrighted by the IRS).

Gruber's problems centered around his contributions to the development of Obamacare, his string of documented comments about the need to deceive Americans to secure the bill's passage, and his repeated observations about how easy that was given how stupid we all are.

A fascinating comment was made during the hearing by committee member Elijah Cummings.  Unconcerned about the fact that Obamacare is built completely on lies, or about the insult to America's intelligence, his stated concern was that Gruber's statements gave the GOP a "public relations gift", and that the democrats stood exposed.  The main reason Mr. Cummings was unhappy was that Dr. Gruber had dared to speak the truth.  He had broken "omertà".   Omertà (silence) is a principle that evolved in Sicily, used by the Mafia as a code of conduct that forbids disclosing information about criminal activities.  The totalitarian left shares that principle, and for good reason.  Ironically, it was originally used as a means of keeping government out of people's private affairs.  Now it has become a principle used by the government to keep private citizens away from the truth.

History will remember Dr. Gruber as a sacrificial goat whose naiveté exposed the shenanigans of his totalitarian bosses.  Like them, he brought arrogance and an elitist sense of entitlement to the table, but he lacked the street sense to pull it off.  He was a political naif in the art of weaselspeak, and he let the cat out of the bag.  It is that about which Democrats are unhappy.

He should have stuck to teaching economics to college kids, where a PhD is a mark of high honor,  and left the lies and the disrespect shown to the nation to the people who do it for a living.  For them, PhD stands for Phony Dufus.

Posted by springeraz at 8:44 AM No comments:

Empathy For The Devil

Hillary says we need to show empathy for our enemies?  People who want us all to die?  Here's a video clip with Greta Van Susteren on Fox...Oliver North's reaction is priceless.

This woman wants us to believe she has the tickets to be the Commander In Chief, but then she says stuff like this.  It's a great way to interact with grandchildren, Hill, but it doesn't work with 11th century madmen who are willing to die for a chance to cut our heads off.

Posted by springeraz at 9:43 AM No comments: