The Fine Art Of Grubering

Jonathan Gruber is referred to as the "architect" of Obamacare.  His approach to selling the idea to Americans is summed up here in a quote by him:


“Lack of transparency is a huge political advantage. And basically, call it the stupidity of the American voter or whatever, but basically that was really really critical for the thing to pass….Americans are too stupid to understand…"

If cynicism and moral bankruptcy were Olympic sports, Jonathan Gruber would have at least two golds locked up.  If there was a Hall of Fame for a sport called  "Contempt for American Citizens", they would put a statue of him in front of it.  In a country run by socialist wannabes who aspire to complete control, where the end always justifies the means and the concept of integrity is a joke, this guy has some stiff competition, but he's way ahead on points.

So now a new word has entered the national lexicon.  If you buy a car that turns out to be a piece of junk, you've been "grubered".  A "gruberism" is a lie concocted by the left for the purpose of keeping voters in the dark, at least until the next election.

Gruber  verb  \groo-burr\
:  To tell a lie deliberately with the intent of misleading.
:  To misinform people based on the belief that they are too stupid to understand the wisdom of your position.

example:  To conceal the truth about Obamacare it was necessary to gruber the entire nation.
noun
:  A calculated mistruth intended to deceive listeners

example:  The explanation given in favor of Obamacare was one huge gruber from one end to the other.

Gruberish   noun  \groo-burr-esh\
:  Any bewildering deluge of falsehoods designed to confound an audience based on the speaker's awareness that the truth must be concealed by any means necessary.

example:  A preposterous mountain of gruberish was put forth intended to hide the fact that the entire nation had been grubered about Obamacare. 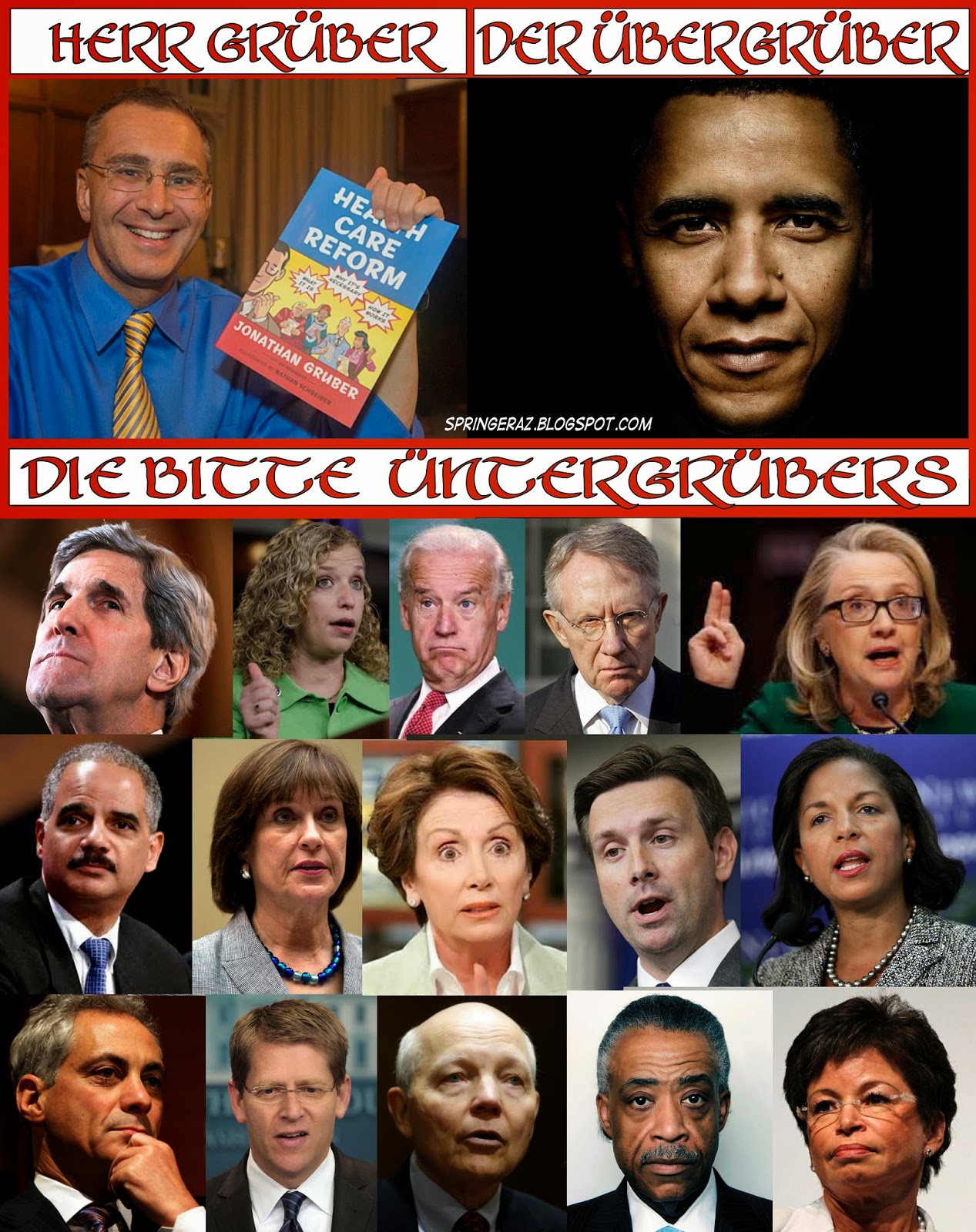 The absence of respect for Americans is obvious, and something we have all come to expect from the socialists,  but what is truly breathtaking here is the total lack of self respect exhibited by Mr. Gruber.  He knows the idea he's selling is crap, but rather than question his own involvement, his only reaction is to lie about it to get away with it.  Nobody's going to catch on anyway, we're all too stupid.

Obamacare is not and never was about health care.  It's about control.  Like just about everything else the left has to sell us, the effect it will have on the economy and on American's lives is not the point.