When They Believe Their Own Fiction 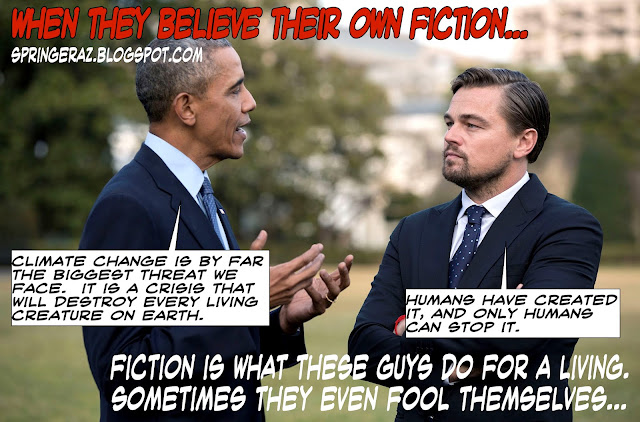 An open letter signed by 375 scientists defended the notion that climate change is real, and caused by human activities.  A rebuttal written by another group of scientists exposes the entire matter for the politically driven hoax that it always has been.  (Read the entire thing here)

Here's an excerpt from the rebuttal:


"They convey the impression that it is somehow illegal, immoral or damaging to the planet to vote for the Republican party’s candidate in the forthcoming presidential election because he  disagrees with the totalitarian position on the climate question that they espouse with such religious fervor and such disregard for science, in truth it is not the business of scientists to abuse the authority of their white lab-coats by collectively suggesting that “Science” demands the voters should or should not cast their vote in any particular direction...
..Therefore, the signatories hereto repudiate the letter issued by the 375 activists as reflecting not scientific truth but quasi-religious dogma and totalitarian error; we urge the voters to disregard that regrettable and anti-scientific letter; and we invite every citizen to make up his or her own mind whom to elect to the nation’s highest office without fear of the multifarious bugaboos conjured into terrifying but scientifically unjustifiable existence by the totalitarian activists who have for decades so disrespected, disgraced and disfigured climate science."

Posted by springeraz at 7:20 PM